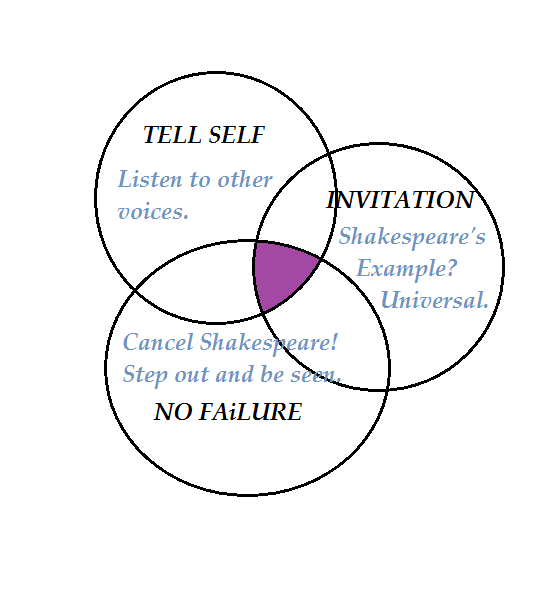 A JOURNEY AND A DREAM

In a week I have travelled quite a long way. The other night I had a dream in which I was in a barred cage, and contemplated how I might escape it. Outside was sunlit grass, inside a naked floor under a covering cloth of darkness, the darkness of fear and self doubt. I took hold of two bars and found that I could part them with little effort and simply step out: the cage of myself.

Jeffrey’s invitation was to synthesize the common overlap between the three question. My first answer was to listen no longer to my own voice but what others ( and life itself) were telling me. (I am over familiar with the repetitive and bullying injunctions of my thuggish mind.’You ought, you should, and never shall you rest’) The next day I received a letter, a wild dog attack from my eldest daughter’s partner. I will spare you the content but just give the context. I have not had any contact with my daughter for seventeen years, all letters ignored, all overtures rebuffed.I have never met what might have been my grandchildren. I came face to face with the bars of that cage, it was the lingering hope of restoration.

What parted the bars was the end of such hope. The letter revealed such hatred that I had to recognise the past could never be restored, and never would be. Mother was over. I wrote a letter of farewell, and stepped through and into a different future.

To the second question of how to devote a year committed to one question, I answered with a sense of liberty and time for what might prove rewarding by trying to plumb the answer to Shakespeare’s perennial and unending vitality. I would put into practice what I learnt by finishing a play.

It wasn’t until I answered the third of what would you commit to if you knew it couldn’t fail that the wheel came round full circle. Shakespeare was playing safe, and writing a play that couldn’t fail was terrifying, because it would be devalued by that condition, so it couldn’t really succeed either! I then realised that my cage had been constructed from the fear of other people precisely because my daughters’ rejection had injured self confidence fatally. Regaining it required me to ‘go public’ as an identity, as a writer, but mostly as vulnerable, and nakedly released.

Being a good mother was one thing I believed I had managed. Managing a divorce was predicated on that first and only imperative. Building a home for the united children (4) of two marriages, and having the ex and his new wife to stay frequently was part of that imperative and the generosity of my husband in accepting that demand was also an acceptance of the domination of ‘motherhood’ , although he did it with great generosity, and never distinguished between his and another man’s daughters. To ensure this continued he named my ex husband as his first child’s godfather  should the worst happen to us. We thought we had done it differently, and no harm could come.

What we could not influence happened later and severed us all completely. This week hope died.

What lies in the centre at the intersection, the purple patch?  It may come back to the play, whether for stage or not. Being seen not for a clever idea, but a deeper kind of truth, the dynamic intersection between an individual and the role we clothe ourselves to perform. I shall cast off an outworn motherhood, more than threadbare now, so tattered I wonder how it clothed me for all these years of hope, and turn towards writing what I know personally, maybe a memoir, maybe a portrait of my earlier family that generated the desire to raise lots of loving children (I had no father and no siblings and longed for companions) and within whatever it turns out to be find something universal. At this time of Christmas the ‘Family’ is a heaven, but can equally be a hell. Time to explore.